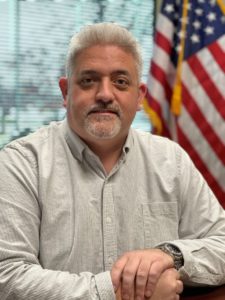 “My patriotism for the United States is at an ultimate high,” Gallant declared. “I am excited and have a great sense of pride becoming an American.”

The official preparation took over 11 months through the U.S. Department of Homeland Security with all of the COVID challenges. Greg had to pass a two-part citizenship test with all of its civics components, which opened up his understanding of how we became the greatest nation on Earth. But Greg’s journey dates back to when he started his career in the material handling industry in 1996 in Canada as a young project engineer. To lawfully be employed in the U.S., Greg had to obtain work visas because he was a Canadian citizen.

After four years of travelling between Canada and the U.S., he chose to move from his hometown of
Windsor, Ontario, and took up residence in Virginia Beach, Virginia. Like many immigrants following 9/11, he experienced the challenges of working in the States and almost moved back. He was able to stick with it and successfully continued his career path which eventually lead him into project management.

Greg eventually moved to Michigan, got married to his wife Leslie, started a family with the birth of their
daughter, Emily, and got a green card. The true American Dream… Almost…

Something was missing. Because they were born here, both his wife and daughter shared the common thread that connects all Americans – the values of freedom, liberty, equality and all of the rights and liberties that come with being a U.S. Citizen. And that was a driving force for Greg to take this path to become an American.

“What I am looking forward to the most is to be able to do things people just take for granted – being able to vote in U.S. elections,” Gallant said.

What was one of the first things Greg did after he passed his Naturalization test? He bought a special flag of the United States of America that he proudly displays in his office in Auburn Hills.

“I’m proud to be able to say that I will be a citizen of the United States of America,” Gallant proclaimed. FATA Automation is a global material handling company with expertise in design, engineering, manufacturing, fabrication, installation, start-up and training. Headquartered in Auburn Hills, MI, FATA Automation has been supporting manufacturing companies worldwide for over 70 years in: automotive, heavy equipment, engine, marine, defense, renewable energy, vehicle parking, electronics, pharmaceutical, food and beverage. For more information, please visit www.fataautomation.com.

PDF Version can be found here